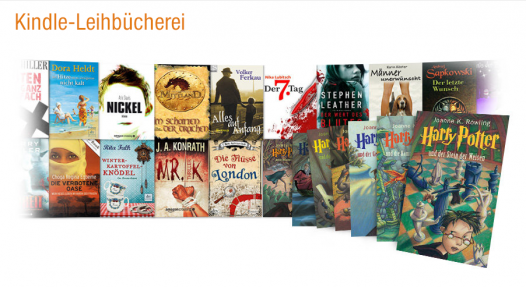 If you’re an owner of Kindle device (not Kindle app) with a Prime membership, you’ll have access to over 200,000 KOLL titles, including all seven Harry Potter books and thousands of self-published bestsellers. You will be able to borrow for free one book per month – with no due dates.

The Kindle Owners’ Lending Library was launched in the US in November 2011 and offers access to a wide array of categories and genres in fiction and non-fiction. Soon Kindle owners with a Prime membership in the UK, Germany and France will also be able to choose from over 200,000 books to borrow for free – including thousands of local-language titles and all seven Harry Potter books in English, French, Italian, German and Spanish – as frequently as a book a month, with no due dates. No other e-reader or eBookstore offers such a service.

Kindle Owners’ Lending Library in the three countries will go live by the end of the month, but you can read more on these special pages: