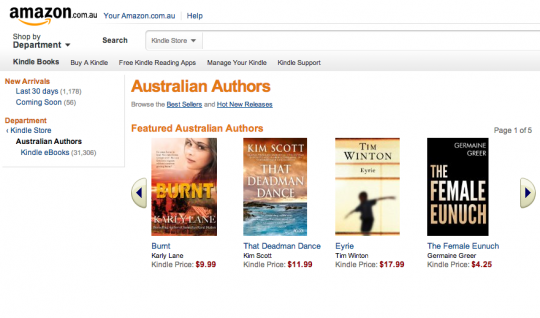 Amazon has just announced the launch of the Australian Kindle Store. It’s available under amazon.com.au and offers, just like in the US, over 2 million titles, with more than 400,000 available exclusively in the Kindle Store.

But the opening of Amazon’s localized Kindle Store means also that you’ll enjoy a selection of titles from Australian authors and publishers, including:

In total there are over 31 thousand books from Australian authors available in the new Kindle Store.

From now on, if you’ll try to shop from Australian location the books in Kindle Store US, you will be advised to visit the Australian site: 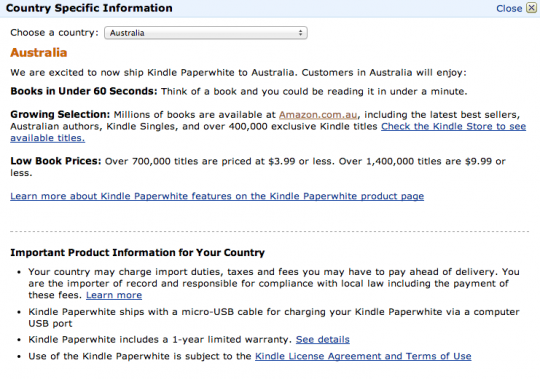 This refer only to Kindle books, because so far, Kindle devices can only be shopped online on Amazon.com, for US dollars, and the price includes standard shipping cost to Australia: 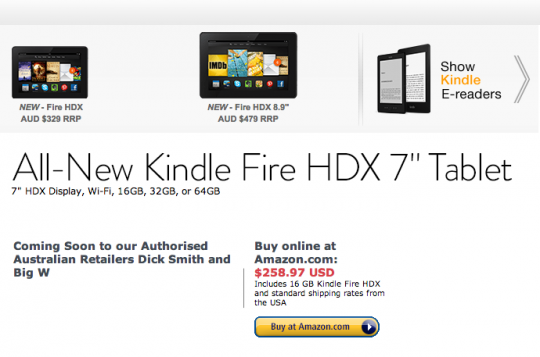 Amazon will also be selling Kindle Fire tablets (HD and HDX) at Dick Smith and Big W stores. The sales should start before Christmas.

Already now, at these two authorised retailers (in stores and online) you can buy Kindle e-readers.

The list price of the basic Kindle is AUD $99, but Dick Smith offers the device today for $89. Kindle Paperwhite (WiFi only) costs AUD $159 at the Australian resellers, compared to USD $150.98 if you shop on Amazon.com.

Sometimes when a new Kindle Store was opened in a new country, users from neighboring countries were also prompted to choose a new location, but this is not the case of New Zealand. New Zealanders can still shop in the US Kindle Store.

Last but not least, Australian Kindle Daily Deal launched immediately after the opening of the store. Just as in the US, four books are featured each day. Today, Tears of the Moon by Di Morrissey is offered for $0.99. Michael Pembroke’s Arthur Phillip sells for $1.99.