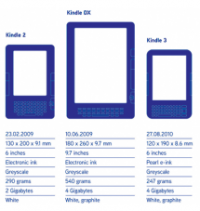 New Kindle devices are going to be announced on September 6 during Amazon’s press conference. CNET reports about two 7-inch Kindle Fire tablets, with one of them said to be ad-supported. The Verge shared teasing images of the new e-paper Kindle, a model with “Paperwhite” frontlit screen.

This year is not going to be as revolutionary as the last one, when Kindle Touch was introduced (a first Amazon touchscreen e-paper device ever), as well as Kindle Fire (a first Amazon tablet ever).

At the time new models hit the market it’s always good to have a look back to compare features and timeline, and get a more dynamic view into the evolution of the Kindle breed.

I’ve collected a few charts and infographics from around the web to let us have a better judgement of this year’s novelties made by Amazon.

5 years since launch of the first Kindle is not a long time, but having in mind that last year’s Kindle Fire (which is on the market only 10 months) has just been discontinued, means that for technology time ticks much faster. Are current Kindle models going vintage on September 6?

In this delightfully minimalist chart by Simone Trotti published on DomusWeb, you’ll see the four models which paved the way for 1st generation Kindle, launched on November 19, 2007. The first model on the left is Incipit. According to an Italian newspaper la Repubblica it was a prototype of the first e-reader and was submitted as a degree thesis at Milan Polytechnic.

Rocket eBook and the SoftBook Reader were first e-readers launched on the market. Introduced 6 years later, Sony LIBRIé was the first e-reading device to have an e-ink display. Have a look at the shapes of these three models: they all are asymmetric. The design of the first Kindle was hugely influenced by them.

I prepared this infographic last year, after the new generation 5-button Kindle was announced. The graph compares the dimensions of the four Kindle generations and the shapes are drawn around the screen. Its size (6-inch) and resolution (800 x 600 pixels) are unchanged since 2007.

It’s interesting to see how much space was saved by removing a full-size keyboard.

Domus Web has another graph which puts together all Kindle devices launched so far. It’s interesting to discover that 7-inch Kindle Fire has similar dimensions to Kindle Keyboard.

By the way, you can check dimensions of the most popular models of e-readers in this post.

If you want to have a glance at the history of Kindle devices, check this infographic created by Website Monitoring back in 2010. This visual is especially useful if you want to see the devices in context: Kindle Store and its content.

Take this simple comparison: at the time of the launch of 1st generation Kindle there were 88,000 ebooks in Kindle Store; now we have access to over 1 million.

If you’d rather want to see the evolution of the Kindle in a timeline view, here’s a handy chart prepared by The Baltimore Sun.

6. Inside the Kindle Fire

What is the economics of the Kindle device? Check this interesting infographic from The Wall Street Journal, showing the estimated cost of major components of Kindle Fire. As you see, in a 199-dollar tablet, materials cost $143.

According to a research company IHS iSuppli, the total cost of producing Kindle Fire is $201.70.

Amazon doesn’t earn any money on devices, it’s a very well-known fact. They make money on selling the content.

It’s a pity that no bigger Kindle Fire is going to see the daylight. The 7-inch screen is good for reading books (disadvantage: backlit screen), and not so good for web browsing, and definitely not good for magazines and newspapers.

Apple is said to put a smaller iPad on the table this autumn. I hope CNET is wrong about Kindle Fire, and that we will see the bigger model this Christmas season as well. As this screen size comparison shows: the difference is huge.

Bonus: evolution of the book

To realize how short is the time frame of the Kindle, and ebooks in general, check this infographic by BestCollegesOnline.com about the evolution of the book. Kindle is a tiny little step at the end – but for our generation, a first one to fully experience reading books in digital form – it’ a huge step forward.

Kindle devices: a look into the past – 7 useful charts & infographics https://ebookfriendly.com/kindle-devices-charts-infographics/ via @ebookfriendly