This issue needs to be raised, especially in view of the 5th anniversary of the AppStore (some apps went free) and rumors that iWork and iLife would go free in iOS 7.

There is iOS 6.1.3 installed on my iPhone, so we’re not talking about iOS 7 testing here. Yesterday I wanted to check out the free apps available as a part of the 5th anniversary, and soon after I opened the App Store app, the screen appeared with a bunch of native Apple iOS apps. 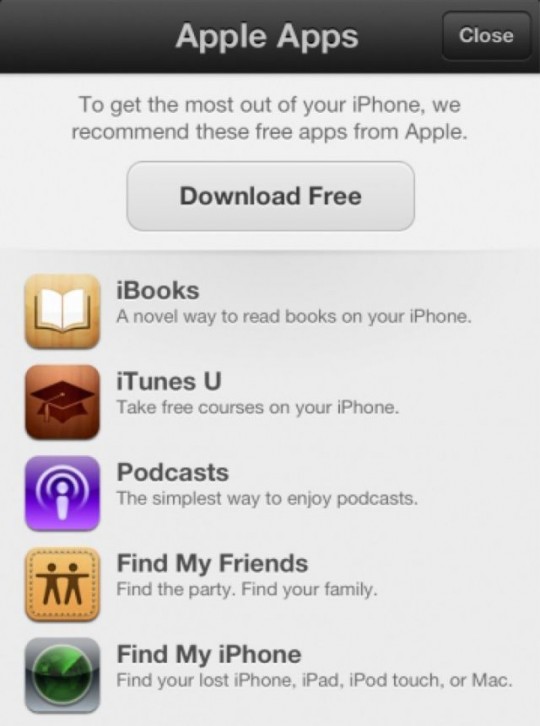 I wish I made a screenshot, but was not expecting any trouble here. The screen looked similar to what you see on the right (courtesy of Cult of Mac), but included iPhoto, Pages, Numbers, and Keynote as well.

On top of a list there was a button saying either “Download Free” or “Free Download”. Obviously, anyone who has heard about the 5th anniversary automatically assumed that it was a generous gift from Apple to celebrate it.

To make things clear: there was only one “free download” button for all the apps. No separate buttons for paid apps (not mentioning their prices) were displayed.

I bulk-downloaded the apps. Today Apple sent the receipts. €4.49 for iPhoto, and €8.99 for each of the three iWork apps (Pages, Numbers, Keynote). Having the apps on the iPhone, I quickly tested them, and have to say, quite frankly, that they don’t deserve their price.

The easiest explanation to this issue, just like to 99% of other issues related to digital content, is called “the bug”. Apparently, Apple is testing something, but it would be much better if they tested the apps, and not users’ nerves.

If you’ll be welcomed with a similar “offer” in the AppStore, be careful. You may end up paying over $40 to celebrate the 5th anniversary of the AppStore, for the apps that are not worth it, and will go free this autumn, anyway.