Gesture is a first chair designed to support our interactions with today’s devices. Before designing the chair, its developer, Steelcase, conducted a global study to analyze postures we take while dealing with different gadgets. The study revealed how the human body interacts with devices and how it responds as we shift from one device to another, and from one activity to another.

We behave differently when drawing on a tablet, texting on a smartphone, or using two devices at the same time. Steelcase lists 9 posture types (by the way, which one you take most often?): 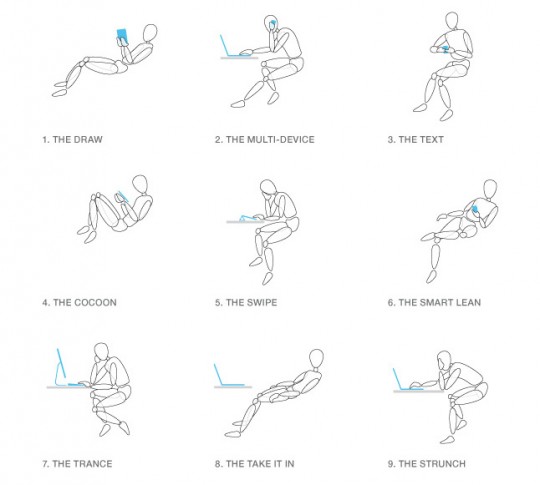 Gesture chair is designed to “support posture changes specifically influenced by technology devices we use today.” The chair’s back and seat move as a synchronized system, adjusting to a user to give continuous and persistent support.

Steelcase’s Gesture chair will be available this autumn, and you can fill out this form to be notified when it’s released.

Gesture chair adjusts when you use different gadgets (video) https://ebookfriendly.com/gesture-chair-adjusts-when-you-use-different-gadgets-video/ via @ebookfriendly