Emoji are the language of the digital generation. They are small symbols like smiley faces and hearts that you can add to text messages or social media updates, and that are usually used to express a person’s attitude, feelings, or mood :-)

The Library of Congress has just acquired the first ever book that contains emoji. It’s Emoji Dick by Fred Benenson, and it’s concept is highly innovative: Moby Dick, Herman Melville’s famous novel of heroic determination and the power of man, was translated into Japanese emoji icons.

Fred Benenson is a data engineer. In 2009 he run a successful Kickstarter campain to raise money to complete the book. Then, via Amazon Mechanical Turk, he contracted thousands of people to translate one sentence of the book into emoji, had the best ones voted into place and compiled the book from those.

A recommending officer for the Library of Congress, Michael Neubert, said:

There is, in the literal sense, no other book in the Library’s collections like it. What is striking for the Library’s collections about this work is that it takes a known classic of literature and converts it to a construct of our modern way of communicating, making possible an investigation of the question, “is it still a literary classic when written in a kind of smart phone based pidgin language?”

Here’s the permalink to the official Library of Congress catalog record.

We wrote about Fred Benenson before. He is an extremely creative person who inspires others to discover new ways of presenting data. Recently he created a fantastic interactive chart that reflects how favorite books of 100 leading cultural people match with each other. 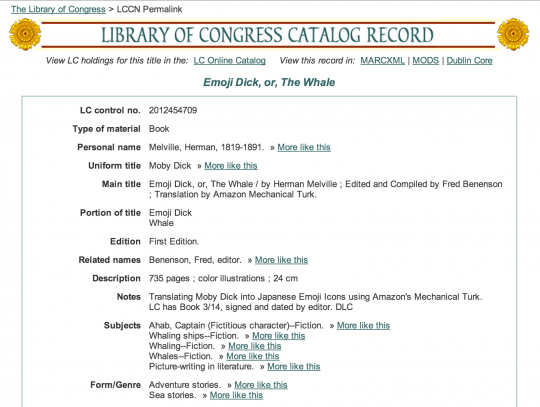 The Library of Congress has added a first ever emoji book https://ebookfriendly.com/first-ever-emoji-book-was-added-to-the-library-of-congress/ via @ebookfriendly