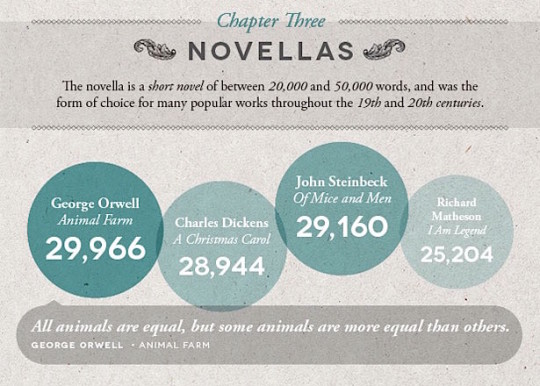 The infographic takes a closer look at word counts of famous books.

It’s never too late to share a great literary infographic, and the one from Cartridge Discount is one of the best in recent years. The focus is on the word count.

The infographic analyzes famous books, from classic novels, to book sagas (Harry Potter, A Game of Thrones), to novellas.

At the end of the visual you’ll find sections devoted to authors, where you’ll find their longest and shortest texts. Ernest Hemingway’s six-word story, “For sale: baby shoes, never worn,” took social media by storm. William Shakespeare’s longest work, Hamlet, had “only” 30k words, compared to Hemingway’s For Whom the Bell Tolls, which was 174k.

How does the word count translate to a reading time? The average reading speed of an adult is around 300 words per minute. That makes 18k words per hour.

Shorter doesn’t mean worse. There are a lot of short books that are classic reads. We collected them all in a comprehensive overview 50 short books for busy people.

Click on the infographic to see it in full resolution.