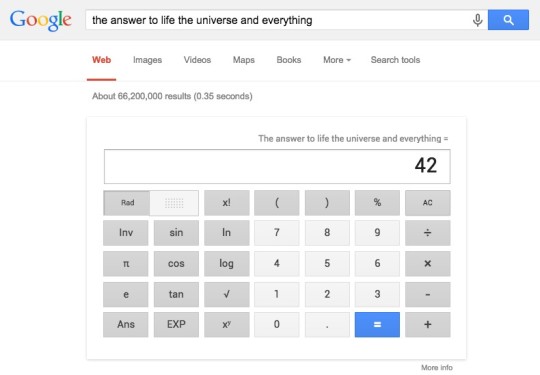 Google celebrates one of the most recognized literary numbers with a clever web search result.

Google web search is famous for shooting too many answers but when it comes to the ultimate question of life, the universe, and everything, they are cleverly to the point.

Type “the answer to life life the universe and everything” in the Google Chrome omnibar or Google web search box, and check it out for yourself.

For those who don’t know the power of “42”. It comes from The Hitchhiker’s Guide to the Galaxy, Douglas Adams’ most famous novel.

A supercomputer called Deep Thought was built by über-intelligent beings to give the answer to the Ultimate Question of Life, The Universe, and Everything.

It took Deep Thought 7.5 million years to process all data and come up with the answer, which was very short and simple: 42.

Google is a kind of a supercomputer, and it took it 0.24 seconds to process the answer, but… it already knows it, right?

Google used to celebrate birthdays of famous people with the doodles. Today, on March 11, 1952, Douglas Adams was born in Cambridge, United Kingdom. Surprisingly, there is no doodle to promote the man who predicted the future of books, television, and search engines. 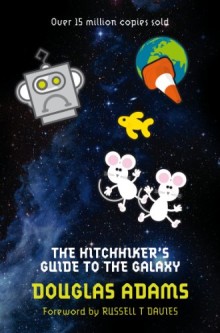 The Hitchhiker’s Guide to the Galaxy [Kindle Edition]

Seconds before Earth is demolished to make way for a galactic freeway, Arthur Dent is plucked off the planet by his friend Ford Prefect, a researcher for the revised edition of The Hitchhiker’s Guide to the Galaxy who, for the last fifteen years, has been posing as an out-of-work actor.

Together, this dynamic pair began a journey through space aided by a galaxyful of fellow travelers: Zaphod Beeblebrox, the two-headed, three-armed, ex-hippie and totally out-to-lunch president of the galaxy; Trillian (formerly Tricia McMillan), Zaphod’s girlfriend, whom Arthur tried to pick up at a cocktail party once upon a time zone; Marvin, a paranoid, brilliant, and chronically depressed robot; and Veet Voojagig, a former graduate student obsessed with the disappearance of all the ballpoint pens he’s bought over the years.

Where are these pens? Why are we born? Why do we die? For all the answers, stick your thumb to the stars!

Google gives the ultimate answer to life the universe and everything (picture) https://ebookfriendly.com/douglas-adams-ultimate-answer-google/ via @ebookfriendly