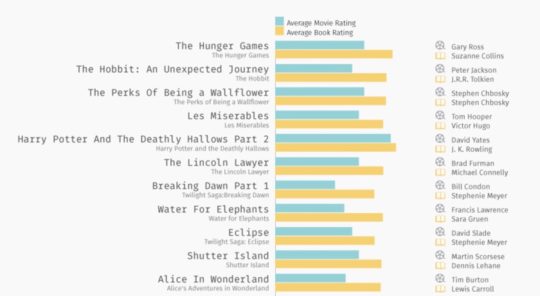 “Never judge a book by its movie” is a famous quote circulating around the web all the time. The book might appear worse than it is in reality.

Here is a proof. The team from Love Reading has published an infographic that puts into one chart average ratings of almost 60 Hollywood movies and the books they were based on.

In general, the books score better, but there are some exceptions: The Social Network, Slumdog Millionaire, or Atonement.

Also, The Lord of the Rings, an Oscar-winning movie by Peter Jackson, was rated higher (although by a tiny bit) than J.R.R. Tolkien’s novel.

Books vs movies: the ultimate showdown (chart) https://ebookfriendly.com/books-vs-movies-ultimate-showdown-chart/ via @ebookfriendly