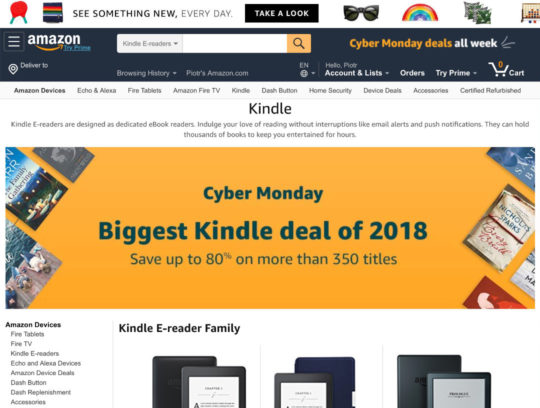 Over 350 top Kindle titles are on sale during Cyber Monday 2018 / Screenshot: Amazon

Amazon has just revealed that on Cyber Monday 2018 almost 400 top Kindle ebooks will be up to 80% off, including novels by Margaret Atwood, Nicholas Sparks, and Sandra Brown.

While updating our extensive list of Black Friday & Cyber Monday 2018 deals for Kindle, Fire, and Echo, we’ve spotted an ad that leaks details of the Kindle Daily Deal Amazon is prepping for tomorrow.

The Cyber Monday 2018 Kindle ad, if it’s not an unintentional leak, can be seen on Kindle e-reader family front page – and so far nowhere else.

As you see in the screenshot above, over 350 books will be offered for prices reduced by up to 80%. We can assume that the books whose covers are shown in the ad are among the hottest titles on tomorrow’s list.

What Kindle bestsellers can you be sure to get at reduced prices on Cyber Monday 2018? 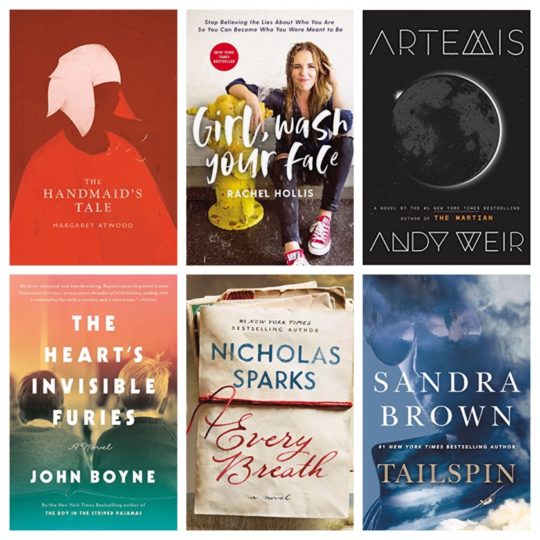 The last book was also mentioned in a Cyber Monday 2018 deals sneak peek Amazon was sending out to press yesterday. In the section devoted to Audible, music, & books, we read:

Save up to 80% during the biggest Kindle books deal of the year! Choose from over 400 Kindle best-selling books, including Girl, Wash Your Face, a #1 Amazon Charts and New York Times bestseller.

As you’ve noticed, there is a difference between the number of Cyber Monday Kindle deals announced in a press release (over 400) and revealed in the ad (over 350). We are sure to see tomorrow no less than 350 titles. You will be able to check them out on Kindle Daily Deal front page.

Obviously, it’s hard to evaluate the attractiveness of the deal seeing only a few book covers, but when it comes to quantity, the 2018 deal will bring fewer deals than last year, when over 450 hot Kindle titles were offered on Cyber Monday for prices between $0.99 and $3.99.

The second-best Kindle Daily Deal of 2018 was running on Black Friday, featuring over 150 Kindle bestsellers. The novels by Michael Connelly (Dark Sacred Night), George R.R. Martin (A Game of Thrones), and Paulo Coelho (The Alchemist) were on the list.

If you aren’t satisfied with the selection of Kindle books in the Cyber Monday 2018 deal, make sure to check out other lists of Kindle deals and special offers: