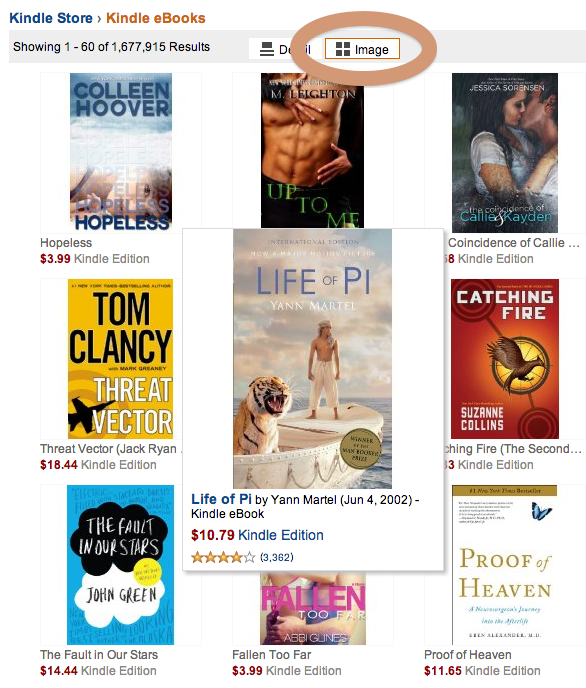 It’s a tiny little improvement but a very useful one. When you go to Amazon website, you’ll see on search or category pages, that there are now two ways of displaying products: a list (as before) and the new one: image grid.

Frankly speaking, the former list view was a huge waste of space. The book covers were extremely small compared to space devoted to book details (which was in fact never used in 100%). When you switch to Image you’ll see the same items in a grid that packs a lot more products into the viewable area of a screen.

In Kindle Store, the information under every book cover contains title and price. When you hover over the image, however, you’ll see not only the bigger cover, but also the author, publication date and rating preview (average rating and a total number of reviews). It’s not much less information than in the other display option, the list – now called Detail.

The image grid is nothing new. Barnes & Noble has it for a long time. In times of picture-driven social networks like Pinterest or Tumblr it’s a must to have this option enabled. When it comes to books, the image grid looks a lot like a bookshelf, so it makes more sense than ever.

Best of all, the image grid is not only available on Amazon.com. I’ve checked other Amazon sites, by searching for a phrase in Kindle Store. The image grid is available in Italian and Spanish site, so it’s a matter of time when it will roll out to all localized Amazon websites.