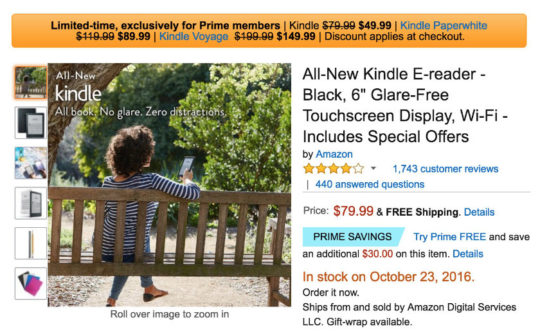 Prices of Kindle 8, Kindle Paperwhite, and Kindle Voyage are reduced by up to $50 for Prime members.

Amazon runs more and more deals that are addressed exclusively for the customers who subscribed to Prime program.

If you are a registered Prime member, you should see the discount being applied at check out.

The promotion is limited in time – and more popular than Amazon had originally expected. You probably won’t get the device in two days with a Prime free shipping. Some versions are simply out of stock.

Kindle Voyage will be back on October 25, 2016. The white 8th-generation Kindle (without special offers) will start shipping on October 19, but for the version with ads, you’ll have to wait until November 17, 2016.

If you haven’t joined Prime already, you can do so now and can benefit from this offer the moment later.

Amazon Prime is a multi-benefit subscription program, that offers over 20 different features, including:

When joining Prime you can pick up a monthly or yearly subscription plan:

Prime members can expect exclusive deals during Amazon Prime Day that’s being held annually in July. For instance, check out the Kindle Unlimited promotion for Prime Day 2016. Plus there are special deals for Black Friday & Cyber Monday, and Prime early deals throughout the entire year.

Amazon Prime exclusive deal – save up to $50 on the Kindle https://ebookfriendly.com/amazon-prime-exclusive-deal-save-kindle/ via @ebookfriendly