Amazon and Goodreads announced their marriage yesterday. How will it affect the way Goodreads lets book lovers share their passions and interests? The deal is expected to close in a few weeks, and no more details were revealed – but you can see first results already.

This little adjustment, shown below in a comparison of screenshots from Goodreads, was made on the same working day the deal was announced. The drop-down menu with online stores is placed under the description of every book on Goodreads. 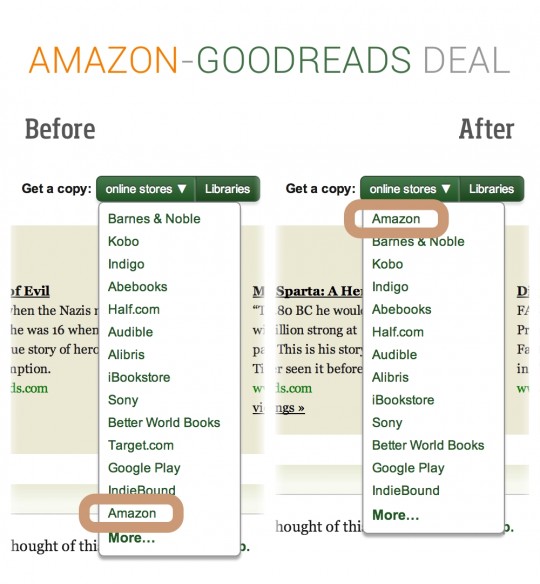 I predicted this thing to happen and was lucky to make a “before” screenshot right after the announcement. An hour before, when I opened a computer again, on most of Goodreads’ book detail pages, Amazon was already on top of the Online stores list.

From a user’s point of view the change doesn’t seem to be essential, but when it comes to business it is. Goodreads makes money on sending users to bookstores, as the site takes a small cut from every purchase made via the sending link. Amazon offers a most attractive affiliate program, together with and an extended API. Goodreads was using it extensively for a long time – until last January. John Mitchell explained it in detail for the Read Write Web. Till that time Amazon was on top of the Online stores list.

A year ago the book recommendation site had to switch to Ingram Book Company’s data. The major reason was that Goodreads was violating two Amazon’s API usage requirements: usage on mobile/handheld devices, and simultaneous linking to competing stores.

Now Amazon is back on top of buying choices. The game is not about how much will Amazon benefit, but how much will competitors lose. It will be Amazon’s biggest win. The Goodreads-Amazon deal is all about streamlining traffic to Amazon – and not to Barnes & Noble, Kobo, Google Play, or Apple’s iBooks Store.

When it comes to traffic, it must be huge. Goodreads doubled in size in 2012 only. In December it had 13 million users, and site’s users added more than 210 books to their shelves.

Other bookstores will be affected in other ways, too. Goodreads offers an API “to help websites or applications that deal with books be more personalized, social, and engaging.” It’s being used, among others, by Kobo ebookstore. Rakuten-owned store’s review and rating system (and the impression you get from it), is entirely relying on the data pulled from Goodreads. If Goodreads decided to drop the API, Kobo would turn out to look like a dead town. 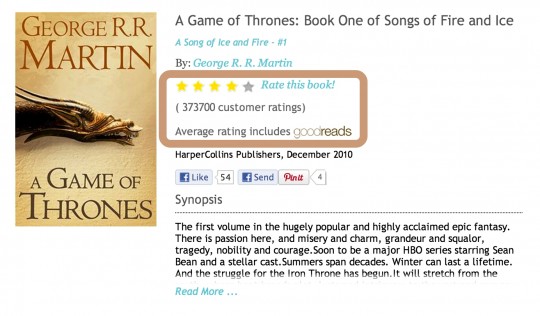 Making Goodreads too dependent on Amazon will push users to migrate. The only question is where. Amazon? Maybe that’s the goal. Amazon and Goodreads enjoy two most vibrant book communities. Why Amazon would need to keep the community elsewhere (or in other words: a couple of more clicks away from a Buy Now button)?

My hope is that as a result of the deal the fantastic Goodreads community will not start to be dying. Good reads are much more important that good deals.