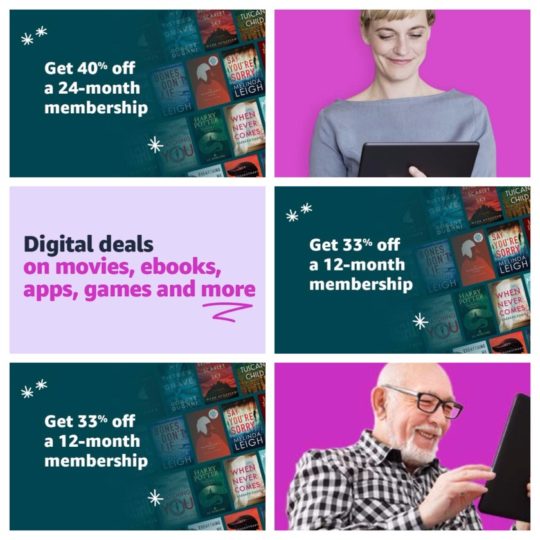 Which Kindle Unlimited plan are you going to pick up? / Images: Amazon

You can save 40% on the 24-month pre-paid plan, or 33% on the 12-month subscription. The deal is available for both new and current subscribers.

Digital Day 2018 – a shopping event focused on all things digital – is coming on December 28. You will be able to save on thousands of Kindle ebooks, graphic novels, magazines, movies, and apps.

Some of this year’s Amazon Digital Day deals were already revealed in a sneak peek announcement. The list includes deals on Kindle ebooks (up to 75% off), 3-month Kindle Unlimited plan for $0.99, and several deals on Audible subscriptions.

Other digital deals are already active and will be surely included in the Digital Day directory. One of them is a long-expected deal on long-term Kindle Unlimited plans.

Spotted by The eBook Reader blog yesterday, the deal offers three pre-paid Kindle Unlimited plans, and you can see already its ad on a front page of a Kindle Store.

You can choose from the following options:

When you decide to buy Kindle Unlimited via the current deal and click on a “Redeem Offer” button, your default Amazon payment method will be charged immediately for the entire period.

The offer is available for all customers – both the ones who haven’t tried the service before and current subscribers. If you are in a latter group, the newly purchased plan will be just added to your existing membership. 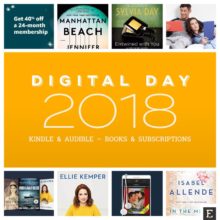 Top article
Top Kindle reads for $4.99 each, 96% off 3-month Kindle Unlimited plan, save 33% on Audible Romance Package for 3 months, and more!

What is Kindle Unlimited?

It’s one of Amazon’s most popular digital subscriptions. It gives members unlimited access to over 1 million eligible books. You can also download Audible audiobook companions, comic books, or digital versions of popular magazines and newspapers.

It’s worth highlighting that as much as 80 Kindle Unlimited books are among Top 100 Kindle bestsellers of 2018.

In an early Digital Day 2018 deal, Kindle Unlimited plans are up to 40% off https://ebookfriendly.com/amazon-digital-day-2018-kindle-unlimited-deals/ via @ebookfriendly