A recent study by Russia Beyond The Headlines (RBTH) shows that as much as 70% of Russians read now books in electronic format. Over a half of them turned to ebooks in the last three years, with 23% in the last year alone.

What’s even more interesting is the most important reason to turn to ebooks: “less time to buy (print) books.” Almost 60% of survey respondents declared it, with over 30% saying that they don’t want to spend money on real books. This leads us to the main characteristic of Russian ebook market phenomenon – piracy.

Eugene Gerden, in the article for Publishing Perspectives (in which he described in detail how to interpret the  RBTH infographic), says that even 95% of all ebook downloads are pirated files. The number matches the part of the infographic listing where Russians get their ebooks. 92% of them download ebooks from the internet for free, far beyond the 15% of readers who buy ebooks on specialized websites.

According to Andrei Yurchenko, a senior analyst at Pro-books magazine, one of Russia’s leading publishing trade magazines, pirated sites remains popular in Russia resulting from the lack of any real competition from companies that distribute legal content: it is estimated that between 100,000-110,000 titles are available in pirated editions, compared to just 60,000 available legally.

It’s great to see infographics that related to global ebook markets, not only US. They show that the world, due to several factors (pricing, availability, habits) is not following the US pattern of the ebook market development.

To quote only the device section: most Russians read ebooks on a computer or notebook. Tablets occupy the last place on a list (21%), after dedicated e-readers (38%), and smartphones (28%). Tablets taking over e-readers is clearly not a worldwide trend. 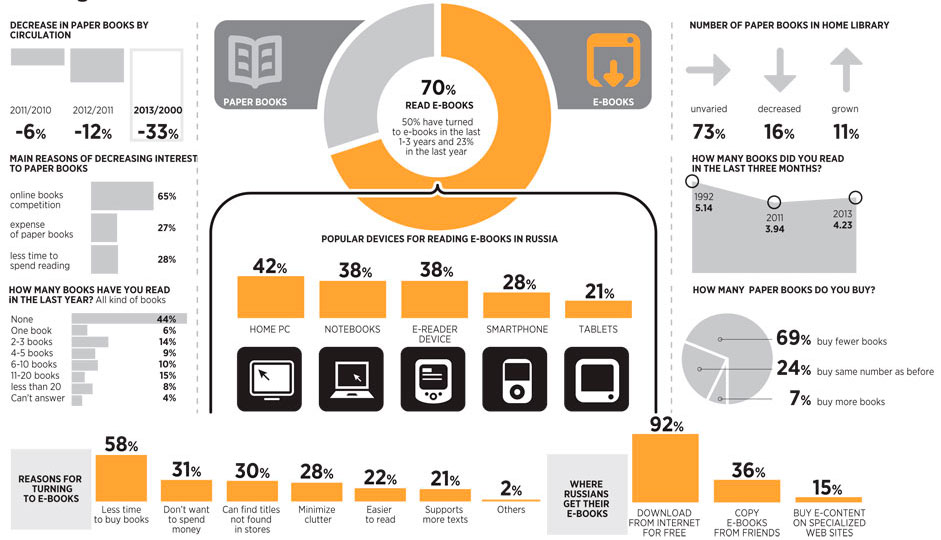