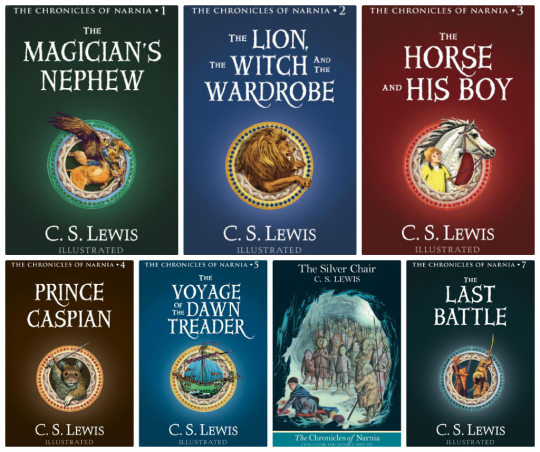 In today’s Amazon Gold Box / Kindle Daily Deal you can get seven books from the beloved Chronicles of Narnia series by C.S. Lewis. Each book is only $1.99, instead of $6.99.

These books are PTA Family Favorites (grades 4-5), among the most frequently cited in a survey of PTA members as books they love to read together as a family. The Hunger Games trilogy is the favorite in grades 6-8, and Beverly Cleary’s Ramona Quimby series is picked in grades 3-4.

Chronicles of Narnia books – today only $1.99 each

The Magician’s Nephew: The Chronicles of Narnia

Illustrations in this ebook appear in vibrant full color on a full color ebook device, and in rich black and white on all other devices.

On a daring quest to save a life, two friends are hurled into another world, where an evil sorceress seeks to enslave them. But then the lion Aslan’s song weaves itself into the fabric of a new land, a land that will be known as Narnia. And in Narnia, all things are possible.

The Magician’s Nephew is the first book in C.S. Lewis’s The Chronicles of Narnia, a series that has become part of the canon of classic literature, drawing readers of all ages into a magical land with unforgettable characters for over fifty years. This is a stand-alone novel, but if you would like to journey back to Narnia, read The Lion, the Witch and the Wardrobe, the second book in The Chronicles of Narnia.

This large, deluxe hardcover edition of the first title in the classic Chronicles of Narnia series, The Magician’s Nephew, is a gorgeous introduction to the magical land of Narnia. The many readers who discovered C.S. Lewis’s Chronicles through The Lion, the Witch, and the Wardrobe will be delighted to find that the next volume in the series is actually the first in the sequence–and a step back in time. In this unforgettable story, British schoolchildren Polly and Digory inadvertently tumble into the Wood Between the Worlds, where they meet the evil Queen Jadis and, ultimately, the great, mysterious King Aslan. We witness the birth of Narnia and discover the legendary source of all the adventures that are to follow in the seven books that comprise the series.

7 books from “Chronicles of Narnia” series are today just $1.99 for Kindle https://ebookfriendly.com/7-books-from-chronicles-of-narnia-series-are-today-just-1-99-for-kindle/ via @ebookfriendly