Recently, NextMarket Insights, a research company focused on new consumer technologies, released The e-book consumer 2013 report, based on a survey of over 1200 e-reading households in the US conducted at the end of 2012.

While the full report costs $499, NextMarket shares on their blog some very interesting excerpts. The post about the rise of the multi-e-reader household is especially interesting as it summarizes the trend in embracing ebooks not by individuals, but families.

Below we visualized one of the most important learnings: as much as half of all US households that use e-reading devices, have actually more than one such device.

Many households that purchased a dedicated e-reader in the last few years have now also have acquired a tablet. This has resulted in a growing number of households that have multiple e-reading devices as well as “hand-me-down” e-readers.

Such a big number of households with two or more e-reading devices is a result of buying devices serving different needs (tablets vs. e-readers), but also buying a new one. The older, “hand-me-down” device is being passed on to another household member.

NextMarket Insights estimated in a report that 4.5 million e-reading devices became a hand-me-down device in 2012. 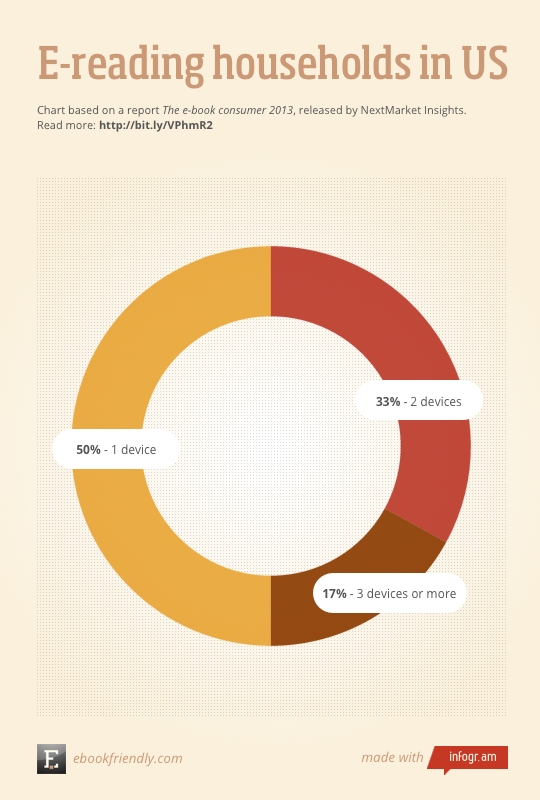 Infographic made with Infogr.am.

50% of e-reading households in US have more than one device to read ebooks https://ebookfriendly.com/50-of-all-e-reading-households-in-us-have-more-than-one-e-reading-device/ via @ebookfriendly